An early demonstration model of the St Andrews air cell. Air enters and leaves via the porous circular membrane in the centre (Image: Peter Bruce/EPSRC)

The team’s prototype device has a capacity-to-weight ratio of 4000 milliamp hours per gram – eight times that of a cellphone battery. Even a 10-fold improvement is possible, but tweaking conventional lithium-ion designs will likely offer only a doubling in capacity

The new battery has a higher energy density than existing lithium ion batteries because it no longer contains dense lithium cobalt oxide. Instead, the positive electrode is made from lightweight porous carbon, and the lithium ions are packed into the electrolyte which floods into the spongy material.

When the battery is discharged, oxygen from the air also floods through a membrane into the porous carbon, where it reacts with lithium ions in the electrolyte and electrons from the external circuit to form a solid lithium oxide.

Bruce and colleagues are now working to transform their proof-of-principle version into a small working battery like those used in mobile electronic devices. “But the technology could be just as important for electric and hybrid vehicles in future,” Bruce points out.

Hitachi Has Some of the Best Non-Air Lithium Batteries

To reduce internal resistance, the battery employs a new manganese cathode and an original Hitachi battery structure, in such as thinner electrodes, power collection method and effective configurations to achieve the world’s highest output.

A second-generation lithium-ion battery with an power density of 2,600 W/kg that currently is being delivered for automotive and railway applications, is the world’s only mass-produced lithium-ion battery for on-board applications. Up to this point, a total of some 600,000 cells have been delivered, mainly to car manufacturers and railway companies.

Moreover, development of a third-generation lithium-ion battery having an even higher power density (3,000 W/kg) has already been completed, and will go into mass-production in 2010, with deliveries scheduled to begin the same year. 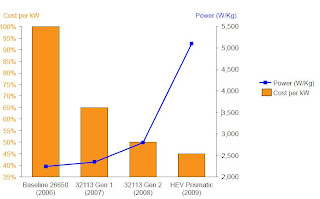 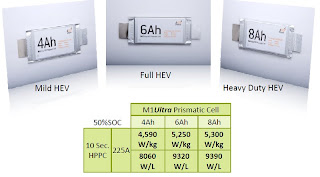