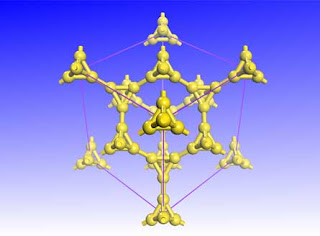 Replacing carbon atoms in diamond with pyramids of carbon could produce a new material that is both lightweight and hard.

Diamond may have a softer side: T-carbon.

This fluffy form of diamond, simulated in a Chinese supercomputer, could be used for a variety of applications — if someone can make the stuff and prove its stability in the real world.

“What is the most surprising to us is that such an elegant structure has never been proposed before,” says Gang Su, a materials scientist at the Graduate University of the Chinese Academy of Sciences in Beijing and a coauthor of an upcoming paper describing T-carbon in Physical Review Letters.

Inspired by a television show about Egypt’s pyramids, Su calculated how to revamp the crystal structure of cubic diamond by exchanging each carbon atom with a pyramid of four carbon atoms. This arrangement should be 43 percent as dense and 65 percent as hard as diamond.

“It would be a very light, hard material, so you could imagine a large number of applications,” says Wendy Mao, a geophysicist at Stanford University who was not involved with the research.

Su and his colleagues hope the material will ultimately prove valuable for the aerospace industry and for storing hydrogen as an energy source. Because of the way electrons would flow through T-carbon, it could also be useful as a semiconductor. The researchers speculate that T-carbon may even be a component of interstellar dust that could help to explain distortions of light in this dust first noticed by astronomers in 1965.

But other theoretical physicists doubt that these carbon pyramids will ever be built. Because carbon has a remarkable ability to form different kinds of molecular bonds, there are countless ways carbon atoms can be rearranged to form new structures, says Artem Oganov, a crystallographer at Stony Brook University in New York.

Most of these arrangements, though, are too unstable to exist in an everyday environment. The trick is in finding the few that can actually be created and stick around, and are thus worthy of joining the existing carbon “allotropes,” an exclusive family that includes graphite and amorphous carbons such as soot, both found in nature, as well as substances first discovered in a laboratory, such as graphene, carbon nanotubes and fullerenes.

“I think there will be problems in synthesizing [T-carbon],” says Oganov.

Because of T-carbon’s low density, it must be formed at pressures far below everyday atmospheric levels. In contrast, other recent efforts to make new forms of carbon have focused on generating high pressures by squeezing materials. To make T-carbon, Su proposes detonating a chunk of diamond or graphite, or creating negative pressures “somehow by stretching diamond with an extremely large strength.”

Renata Wentzcovitch, a materials scientist at the University of Minnesota in Minneapolis who was not involved with the research, thinks she may know of a way to make T-carbon from smaller carbon compounds. But she’s not sure whether T-carbon would be stable enough to warrant the effort.

“Even if it was synthesized, I don’t know if it would hold together,” says Wentzcovitch. Lower-energy structures tend to be more stable. “The energy of this stuff is much, much higher than other forms of carbon,” she says, “and little perturbations might cause the structure to collapse.”

Only by making T-carbon in the lab, Wentzcovitch and other researchers agree, can Su demonstrate that the structure deserves to become diamond’s new cousin — and not just its imaginary friend.

Read next: Sanswire Stratellite and comparing different air surveillance systems »
« Shift to 450 mm wafers may wait two nodes for the 10 nm node in 2015-2017 according to Intel researcher