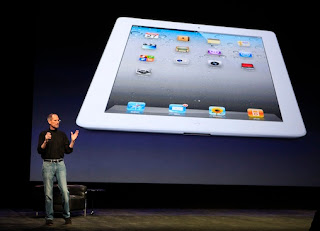 Apple Inc. Chief Executive Steve Jobs surprised a crowd of fans by taking the stage Wednesday to unveil the next version of his company’s iPad tablet.

The executive, who took a medical leave earlier this year, joked with the audience, saying he “didn’t want to miss today.”

Mr. Jobs, a cancer survivor and transplant recipient, appeared energetic though thin as he took the stage at the invitation-only event.

The Cupertino, Calif., consumer electronics maker unveiled a second-generation iPad. Mr. Jobs said the iPad 2, which has a dual-core microprocessor and two video cameras, is thinner and lighter than its predecessor.

The new version will start at $499, which is the same price as the original model. It will be available in black and white colors and offered by both AT&T Inc. and Verizon Wireless. Mr. Jobs said it will begin shipping on March 11 in the U.S. and in more than two dozen other countries on March 25.

Apple will retain the prices of 2010’s iPad. The Wi-Fi versions start at $499 for a 16GB model and climb to $699 for a 64GB configuration, while the 3G iPads are priced at $629 to $829. The 3G models will be available for both AT&T and Verizon, which base their networks on competing cellular technologies.

* iPad 2 has a new dual-core processor — an Apple-designed chip dubbed the A5 — that doubles the speed of the tablet.

* Graphics processing, he added, is up to nine times faster.

* includes a pair of cameras, one facing the front of the device, the other rear-facing, letting users take video and still photographs as well as conduct video conferencing calls using Apple’s FaceTime video chat application. FaceTime debuted last summer with the iPhone 4.

* iOS operating system next week to version 4.3, which will be available for all iPads, the third- and fourth-generation iPod Touch, and the AT&T version of the iPhone.

* iOS 4.3, also set to launch March 11, will introduce an improved Safari browser based on Apple’s Nitro JavaScript engine, and add the personal hotspot feature to the iPhone 4

Read next: Korea is widely deploying WIBro, a version of WIMAX and LTE Advanced »
« Nvidia and Alienware can handle Crysis 2