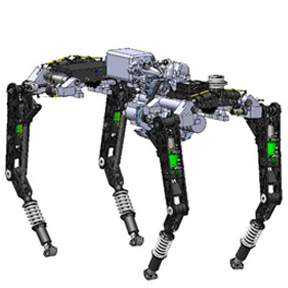 Compared to humans and animals, however, the mobility and manipulations capability of robots currently in service is poor. If these limitations were overcome, robots could much more effectively assist warfighters and other DoD personnel across a greater range of missions. DARPA’s Maximum Mobility and Manipulation (M3) program seeks to create and demonstrate significant scientific and engineering advances in robot mobility and manipulation capability. If successful, M3 will significantly improve robot capabilities through new approaches to engineering better design tools, fabrication methods and control algorithms. M3 expected to reach its final review stage by 2014.

Track 4, Technology demonstration prototypes: To design and construct technology prototype robots and subsystems to spur innovation in the above areas, DARPA has contracted with Boston Dynamics, Carnegie Mellon University, HRL, iRobot, Massachusetts Institute of Technology, Oregon State University, Other Lab and the University of Florida’s Institute of Human and Machine Cognition.

Darpa Autonomous Robotic Manipulation will create manipulators with a high degree of autonomy capable of serving multiple military purposes across a wide variety of application domains, including but not limited to counter-IED, countermine, search and rescue, weapons support, checkpoint and access control, explosive ordnance disposal, and combat casualty care (including battlefield extraction and treatment). ARM will enable autonomous manipulation systems to surpass the performance level of remote manipulation systems that are controlled directly by a human operator.