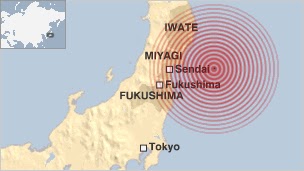 Re-insurance companies have seen their shares fall in anticipation of the payouts for the costs of rebuilding after the Japanese 8.9 earthquake. Early estimates are that the costs will be in the $30 billion range. There were scenarios put out years ago of a superquake to hit Tokyo and Japan calling back a trillion invested overseas and causing problems for the US market and interest rates. So far this does not appear to be the scale of what has happened.

David Cohen, a Singapore-based analyst at regional economic commentators Action Economics, said “In the short term, the damage could even knock off almost 1% of the country’s GDP, Longer-term though, it will balance out, through the rebuilding exercise which will be positive for growth will all the construction taking place. It could turn positive in about 12 months.”

There will also be concerns about damage to productive capacity, Mr Cohen said, and industrial production may suffer as a consequence of the damage caused.

Electronics giant Sony has six factories – four in Miyagi and two in Fukushima – in the north-east of the country, the region which suffered the brunt of the quake.

“Production in all factories has been halted for now,” said Sue Tanaka, of the firm’s communications department.

Read next: Japan reports 500 missing and 300 dead from the worlds Fifth largest earthquake since 1900 »
« Japan has a massive 8.9 earthquake with hundreds killed and energy impacts