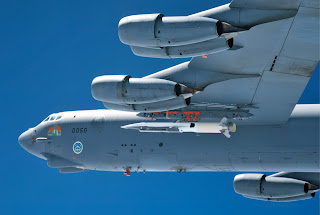 Air Force engineers currently plan to fly the second X-51A Waverider hypersonic flight test demonstrator today. The craft will be carried to 15,240 meters (50,000 ft.) by a B-52 from Edwards Air Force Base in California, and be dropped over the Pacific Ocean. A booster rocket will fire, getting the Waverider to Mach 4.5; then the scramjet will kick in, and designers hope it will reach Mach 6 or more

UPDATE- They are testing again in August, 2012. The previous test in 2011 was not successful.

UPDATE August 15, 2012 – After approximately 15 seconds of flight, the experimental aircraft (waverider) designed to fly at six times the speed of sound was unable to maintain control during a test run Tuesday and was lost. A faulty control fin caused it to lose control before they ignited the scramjet engine. 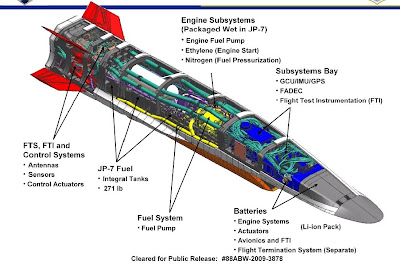 Four X-51As were built for the Air Force by teams at Boeing and Pratt & Whitney Rocketdyne. The X-51A made history on its inaugural hypersonic flight test on May 26, 2010, when it was launched from Edwards Air Force Base, Calif., tucked under the wing of a B-52 Stratofortress. After release, it ultimately accelerated to Mach 5 under scramjet power. The flight was about 10 times longer than any previous hypersonic scramjet flight and “80 to 90 percent” of flight test objectives were achieved, program officials said.

Underscoring the complexity and uncertainty of hypersonic flight testing, Charlie Brink, the Air Force Research Laboratory X-51A program manager, noted that not everything went perfectly on the first flight test. The vehicle failed to accelerate as quickly as anticipated and the flight test had to be terminated after 143 seconds under scramjet power. A perfect flight would have lasted another 100 seconds and accelerated the X-51A cruiser to Mach 6.

After the flight, members of the flight test team independently scoured over telemetry data for a month. Then they conducted a comprehensive “fault tree analysis” to identify every piece of anomalous data to determine the root cause.

According to Mr. Brink, two separate fault trees were identified: The vehicle failed to accelerate as rapidly as expected and unexpected temperatures and pressures were observed in internal sections of the cruiser. Engineers examined and walked through 156 different nodes in excruciating detail in search of a cause.

In the end, the team made design changes to make it a “much more robust” interface. All of the remaining X-51As have been modified with the new beefed up design.

The scramjet is an air-breathing engine, where intake air blows through its combustion chamber at supersonic speeds. This has been compared to lighting a match in a hurricane, and the concept has had limited success. The engine has no moving parts, and the oxygen needed by the engine to combust is taken from the atmosphere passing through the vehicle, instead of from a tank onboard, making the craft smaller, lighter and faster. Designers say it could reach speeds of anywhere from Mach 12 to Mach 24. Mach 24 is more than 29,000 km/hour (18,000 miles per hour.) This could cut an 18-hour trip to Tokyo from New York City to less than 2 hours.