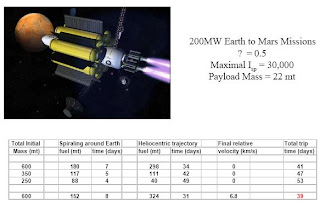 Ad Astra Rocket Company and NASA Johnson Space Center (JSC) have signed a Support Agreement to collaborate on research, analysis and development tasks on space-based cryogenic magnet operations and electric propulsion systems currently under development by Ad Astra. The Support Agreement is the fourth entered into by the parties under an “Umbrella” Space Act Agreement, executed in December of 2007.

Ad Astra will provide NASA with an assessment of VASIMR®’s high power low thrust trajectories over a number of mission scenarios ranging from near-Earth to deep space, while NASA will support Ad Astra’s efforts to mature the design of the 200 kW VF-200 VASIMR® flight demonstrator. This support includes, among other things, engineering design on two of the VF-200 flight demonstrator’s subsystems, integration support and structural engineering of interfaces with a launch vehicle and a potential flight platform (e.g. ISS or free flyer). The Support Agreement also provides for the use of specialized NASA facilities and equipment that may be required for some of the testing.

Variable Specific Impulse Magnetoplasma Rocket, VASIMR® works with plasma, an electrically charged gas that can be heated to extreme temperatures by radio waves and controlled and guided by strong magnetic fields. The magnetic field also insulates any nearby structure, so temperatures well beyond the melting point of materials can be achieved. The plasma can be harnessed to produce propulsion. In rocket propulsion, the higher the temperature of the exhaust gases, the higher their velocity and hence the higher their fuel efficiency. Plasma rockets feature exhaust velocities far above those achievable by their chemical cousins, so their fuel consumption is extremely low.

Read next: Bill Gates Energy Talk at TED 2010 and TED Talk in 2011 on State budgets »
« A pro-Intelligence Explosion case from Richard Loosemore and Ben Goertzel