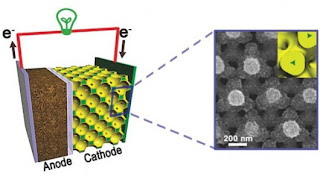 A diagram of a lithium-ion battery with a new nanostructured bicontinuous cathode (left), and a scanning electron microscope image of the nanostructure (right) (Image: Paul Braun, University of Illinois)

University of Illinois researchers have developed a three-dimensional nanostructure for battery cathodes that allows for dramatically faster charging and discharging without sacrificing energy storage capacity. The researchers’ findings will be published in the March 20 advance online edition of the journal Nature Nanotechnology. 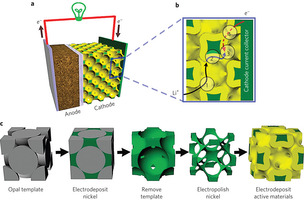 a, Schematic of a battery containing a bicontinuous cathode. b, Illustration of the four primary resistances in a battery electrode. c, Bicontinuous electrode fabrication process. The electrolytically active phase is yellow

Rapid charge and discharge rates have become an important feature of electrical energy storage devices, but cause dramatic reductions in the energy that can be stored or delivered by most rechargeable batteries (their energy capacity). Supercapacitors do not suffer from this problem, but are restricted to much lower stored energy per mass (energy density) than batteries8. A storage technology that combines the rate performance of supercapacitors with the energy density of batteries would significantly advance portable and distributed power technology2. Here, we demonstrate very large battery charge and discharge rates with minimal capacity loss by using cathodes made from a self-assembled three-dimensional bicontinuous nanoarchitecture consisting of an electrolytically active material sandwiched between rapid ion and electron transport pathways. Rates of up to 400C and 1,000C for lithium-ion and nickel-metal hydride chemistries, respectively, are achieved (where a 1C rate represents a one-hour complete charge or discharge), enabling fabrication of a lithium-ion battery that can be 90% charged in 2 minutes.

The performance of typical lithium-ion (Li-ion) or nickel metal hydride (NiMH) rechargeable batteries degrades significantly when they are rapidly charged or discharged.

Making the active material in the battery a thin film allows for very fast charging and discharging, but reduces the capacity to nearly zero because the active material lacks volume to store energy.
Braun’s group wraps a thin film into three-dimensional structure, achieving both high active volume (high capacity) and large current. They have demonstrated battery electrodes that can charge or discharge in a few seconds, 10 to 100 times faster than equivalent bulk electrodes, yet can perform normally in existing devices.

This kind of performance could lead to phones that charge in seconds or laptops that charge in minutes, as well as high-power lasers and defibrillators that don’t need time to power up before or between pulses.

Braun is particularly optimistic for the batteries’ potential in electric vehicles. Battery life and recharging time are major limitations of electric vehicles. Long-distance road trips can be their own form of start-and-stop driving if the battery only lasts for 100 miles and then requires an hour to recharge.

“If you had the ability to charge rapidly, instead of taking hours to charge the vehicle you could potentially have vehicles that would charge in similar times as needed to refuel a car with gasoline,” Braun said. “If you had five-minute charge capability, you would think of this the same way you do an internal combustion engine. You would just pull up to a charging station and fill up.”

All of the processes the group used are also used at large scales in industry so the technique could be scaled up for manufacturing.

The key to the group’s novel 3-D structure is self-assembly. They begin by coating a surface with tiny spheres, packing them tightly together to form a lattice. Trying to create such a uniform lattice by other means is time-consuming and impractical, but the inexpensive spheres settle into place automatically.

Then the researchers fill the space between and around the spheres with metal. The spheres are melted or dissolved, leaving a porous 3-D metal scaffolding, like a sponge. Then a process called electropolishing uniformly etches away the surface of the scaffold to enlarge the pores and make an open framework. Finally, the researchers coat the frame with a thin film of the active material.

The result is a bicontinuous electrode structure with small interconnects, so the lithium ions can move rapidly; a thin-film active material, so the diffusion kinetics are rapid; and a metal framework with good electrical conductivity.

The group demonstrated both NiMH and Li-ion batteries, but the structure is general, so any battery material that can be deposited on the metal frame could be used.

I’m sorry, but the physics of this doesn’t match reality. With nothing more than a garden variety stopwatch/chronometer, and your car on a particularly level stretch of roadway, one need only accelerate up to 105 km/h, then drop into neutral, and time how long it takes to get from 100 km/h to 95 km/h. The nice thing about this is that it “measures everything” about the car at speed, minus virtually the whole “power plant”.

The problem – as indicated in the equation(s) below – is that the charging infrastructure (cables, etc) is going to require so much ampacity (amperage carrying capacity) for the charging cables that no one will be able to lug them into the socket on the car! (for reasonably short full-charge times, for full-distance rated batteries). NOTE that the equations below also take into account all expected electrical losses.

In other words … the high charge rate is either mitigated by higher voltage (reducing the unwieldly cable mass), or longer charge times, or both. Perhaps a design-charge of 10 minutes would be more useful, halving the mass of the cable. But one thing is for certain – the whole charging system should not require all but the most efficient current-limiters, little extra mass. For that, one really needs the charging voltage to be near the series-connected battery voltage.

Personally, I can’t see consumers lugging around a GFI protected, water-cooled, ultra-flexible charging “cord” at the filling station that weighs appreciably more than todays overhead supported petrol fill hoses. Not much more than 15 lbs (8 kg) will be tolerated by most women. ( 2 gallons of milk equiv.)

That seriously limits the maximum length (and inversely, the maximum amperage). The “danger zone” is probably high even with 277 volt circuitry. It seems that there may be no alternative than to either swap battery packs, or go for undercarriage robotically attached charging cables. The fantasy of “charging pads” is absurd since the magnetic coupling to any degree of power requires (eddy-free chassis materials), (good magnetic coupling), (lots of copper/aluminum turns) … it is just more efficient to hook up copper-copper connectors.

Battery swaps off-load the whole time-is-amps aspect, and also completely remove all the “heat of charging”, and “water cooled lead-cables” from the equation. The profit margin on the power-delivered would pay for the battery conditioning and eventual recycling. Now – what do you think the chances are of the international community standardizing on a single, or at most a few interchangeable battery types?

In the 1940s and 1950s, I’d say “very good to excellent”. Today, with all this business of “must have choices, competition, and useless differences”, I’d imagine there would be as many competing battery designs as there are quartz-halogen headlights and brake-light choices today. Remember when there were only TWO headlights? Beam and high-beam. Round, glass, durable and ubiquitously available. Nowadays, if you have a burned out headlamp, you must choose from over 200 different bulbs. Now – imagine batteries – where the manufacturers are all but fainting at the magnificent smell of PROFIT due to DIFFERENCES (which is marketed as “CHOICE”)

Note: Super light electric cars that need less batteries and less stored electricity would be a better way to make all of the issues more manageable.