1. Five-term Congressman Devin Nunes has submitted legislation that he says would achieve energy independence for American by building 200 new reactors by 2040.

Nunes said that royalties from oil and gas development on federal land should be placed in an “Energy Trust Fund” that would promote the development of alternative and resources.

Finally, he said, the bill would mandate the construction of 200 new reactors by 2040. “New streamlined regulations and a system to manage waste will help drive private sector investments in these facilities, which today are mired in red tape, lawsuits and the liability associated with the storage of used fuel. Nuclear power is essential to achieving an abundant and affordable supply of electricity to fuel America’s economic growth and will provide the base load power needed to allow significant growth in next generation electric vehicles.”

Nunes represents California’s Central Valley, which has been mired in a deep depression because of the decline in the state economy. A citizens’ organization called Fresno Nuclear Energy Group has been attempting to build a nuclear reactor to lower electrical rates and revive the regional economy. Congressman Nunes has been spearheading an effort to override California’s state ban on nuclear construction at the federal level. The Energy Roadmap represents an expansion of that effort to a national level.

2. The Strategic Energy Plan of Japan, published by METI in June 2010, sets forth the goal of constructing nine new nuclear power plants by 2020 and more than 14 by 2030. The plan is required to be reviewed every three years and revised if needed. 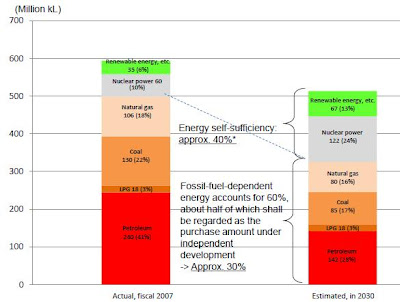 The plan envisions a significant reduction in the overall energy consumed by Japan in 2030 through efficiency measures, as shown in the figure, with nuclear power growing from 10% of primary energy today to 24% in 2030. The share of renewables is also predicted to grow from 6 to 13%.

It costs Japan around ¥16.6 trillion (around US$200 billion) each year to pay for these oil imports. Basically, this represents a quarter of all Japanese annual expenditure on imports. 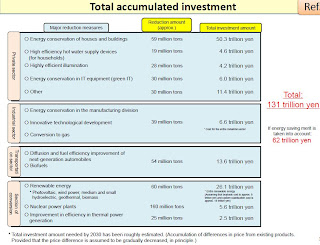 3. The US Nuclear Regulatory Commission (NRC) announced that it had completed the final environmental impact assessment for the two advanced boiling water reactors (ABWRs) proposed for the South Texas Project (STP) site. This is a milestone on the road to a combined construction and operating license (COL) for the plant. STP Operating Company applied for the COL in September 2007. The COL for STP is not anticipated until 2012.

The South Texas Project (unit 3 and 4) will generate an additional 2,700 MW of electrical generating capacity, which will ultimately double the capacity of the current site. The total estimated cost of constructing the two reactors is $10 billion, or $13 billion with financing.

Go USA, maybe only two years or 66% longer to perform the licensing paperwork (5 years instead of 3 years).