Experimental schematic: an ensemble of 700,000 Rubidium atoms, held in an optical dipole trap, is prepared in the state by optical pumping (OP). Probe pulses are used.

New Scientist – They used a beam of photons to measure the small magnetic field produced by a gas made up of a million ultra-cold rubidium atoms. Normally, the spin of each photon would rotate by a certain amount, thanks to its interactions with the magnetic field of the atoms. But the frequency of the photons was chosen so that the photons also interacted with each other when they were in the gas, so that the presence of one photon altered the way a second behaved. These interactions led to a measurement accuracy that grew in proportion to N3/2 – greater than Heisenberg’s limit

The technique could pave the way for more sensitive searches for gravitational waves – ripples in space triggered by moving objects. The waves should cause the distance between two objects to change, and the study suggests that the laser interferometers used to look for such changes could be made more precise. 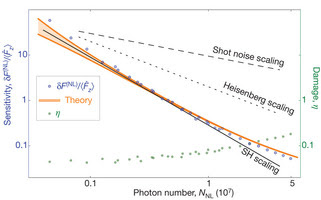