1. Universe Today has a detailed guide and timeline to the encounter with Pluto 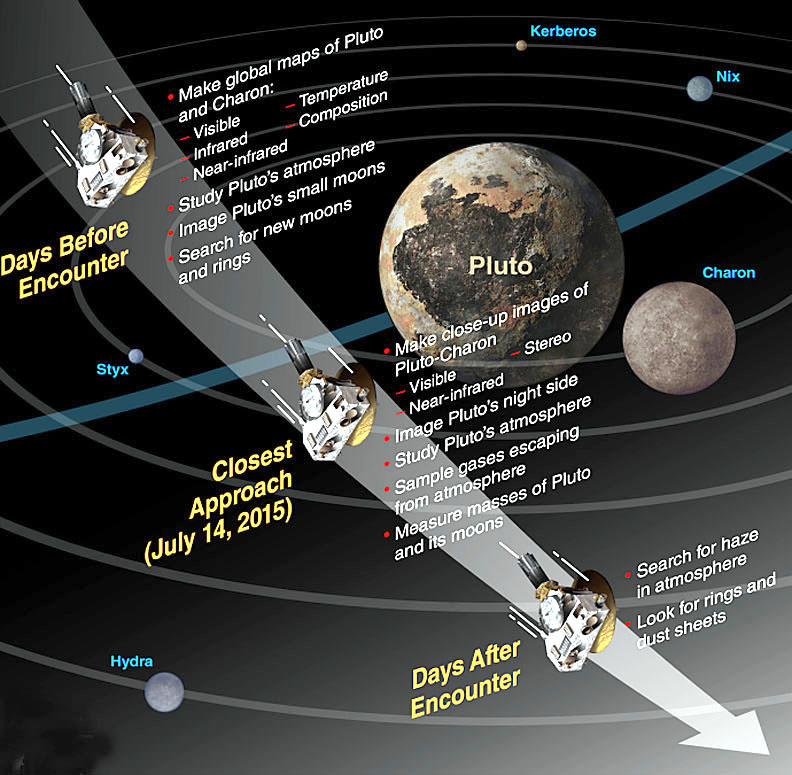 2. Charon, the biggest moon of Pluton, was discovered in 1978. This article explains the discovery of this interesting body. The article is written in Spanish.

3. Universe Today considers if there is life on Pluto

4. Chandra Xray Space Telescope Blog – To make a detailed study of the X-ray properties of young stars, a team of astronomers, led by Elaine Winston from the University of Exeter, analyzed both the Chandra X-ray data of NGC 1333, located about 780 light years from Earth, and of the Serpens cloud, a similar cluster of young stars about 1100 light years away. They then compared the two datasets with observations of the young stars in the Orion Nebula Cluster, perhaps the most-studied young star cluster in the Galaxy

5. Planetaria [was Meridian Journal] More interesting geological features can now be seen, including possible cliffs and a crater, as well as the other bright and dark patches. There is also a new image of Pluto’s largest moon Charon, showing chasms, craters and the large dark area at the north pole. It is now less than two days until closest approach, at 7:49 AM EDT on July 14!

6. Nextbigfuture – NASA’s New Horizons mission has answered one of the most basic questions about Pluto—its size.

Mission scientists have found Pluto to be 1,473 miles (2,370 kilometers) in diameter, somewhat larger than many prior estimates. Images acquired with the Long Range Reconnaissance Imager (LORRI) were used to make this determination. This result confirms what was already suspected: Pluto is larger than all other known solar system objects beyond the orbit of Neptune.

portrait from the final approach. Pluto and Charon display striking color and brightness contrast in this composite image from July 11, showing high-resolution black-and-white LORRI images colorized with Ralph data collected from the last rotation of Pluto. Color data being returned by the spacecraft now will update these images, bringing color contrast into sharper focus. Credits: NASA-JHUAPL-SWRI

7. Nextbigfuture – The New Horizons spacecraft is now approaching a milestone – only one million miles to Pluto – which will occur at 11:23 p.m. EDT tonight, Sunday, July 12. It’s approaching Pluto after a more than nine-year, three-billion mile journey. At 7:49 AM EDT on Tuesday, July 14 the unmanned spacecraft will zip past Pluto at 30,800 miles per hour (49,600 kilometers per hour), with a suite of seven science instruments busily gathering data. The mission will complete the initial reconnaissance of the solar system with the first-ever look at the icy dwarf planet.

8. Nextbigfuture – The large dark areas on Pluto are now estimated to be 300 miles (480 kilometers) across, an area roughly the size of the state of Missouri. In comparison with earlier images, we now see that the dark areas are more complex than they initially appeared, while the boundaries between the dark and bright terrains are irregular and sharply defined.

On the morning of July 14, New Horizons will pass about 7,800 miles (12,500 kilometers) from the face with a large heart-shaped feature that’s captured the imagination of people around the world.

On July 11, 2015, New Horizons captured a world that is growing more fascinating by the day. For the first time on Pluto, this view reveals linear features that may be cliffs, as well as a circular feature that could be an impact crater. Rotating into view is the bright heart-shaped feature that will be seen in more detail during New Horizons’ closest approach on July 14. The annotated version includes a diagram indicating Pluto’s north pole, equator, and central meridian. Credits: NASA/JHUAPL/SWRI

9. Nextbigfuture – Observations from ESO’s La Silla and Paranal Observatories in Chile have for the first time demonstrated a link between a very long-lasting burst of gamma rays and an unusually bright supernova explosion. The results show that the supernova was not driven by radioactive decay, as expected, but was instead powered by the decaying super-strong magnetic fields around an exotic object called a magnetar. Pulsars make up the most common class of observable neutron stars, but magnetars are thought to develop magnetic field strengths that are 100 to 1000 times greater than those seen in pulsars.

Magnetars are characterized by their extremely powerful magnetic fields of 10^8 to 10^11 tesla. These magnetic fields are hundreds of millions of times stronger than any man-made magnet, and quadrillions of times more powerful than the field surrounding Earth. Earth has a geomagnetic field of 30–60 microteslas, and a neodymium-based, rare-earth magnet has a field of about 1.25 tesla, with a magnetic energy density of 4.0×10^5 J/m3. A magnetar’s 10^10 tesla field, by contrast, has an energy density of 4.0×10^25 J/m3, with an E/c2 mass density over 10000 times that of lead. The magnetic field of a magnetar would be lethal even at a distance of 1000 km due to the strong magnetic field distorting the electron clouds of the subject’s constituent atoms, rendering the chemistry of life impossible. At a distance halfway to the moon, a magnetar could strip information from the magnetic stripes of all credit cards on Earth. As of 2010, they are the most magnetic objects ever detected in the universe.

Like other neutron stars, magnetars are around 20 kilometres (12 mi) in diameter and have a greater mass than the Sun. The density of the interior of a magnetar is such that a thimble full of its substance would have a mass of over 100 million tons. Magnetars are differentiated from other neutron stars by having even stronger magnetic fields, and rotating comparatively slowly, with most magnetars completing a rotation once every one to ten seconds, compared to less than one second for a typical neutron star.

10. Nextbigfuture – NASA announced that it has selected four, veteran astronauts to be the first to fly to space on commercial carriers,” said John Holdren, assistant to the President for Science and Technology and director of the White House Office of Science and Technology Policy. “Their selection allows NASA to move forward with the training necessary to deliver on President Obama’s ambitious plan for returning the launch of U.S. astronauts to U.S. soil, while creating good-paying American jobs, and moving us closer to the President’s goal of sending astronauts to Mars in the 2030s.”

The commercial crew astronauts will work closely with company-led teams to understand their designs and operations as they finalize their Boeing CST-100 and SpaceX Crew Dragon spacecraft and operational strategies in support of their crewed flight tests and certification activities as part of their contracts with NASA.

11. Nextbigfuture – there is a proposed High-Definition Space Telescope (HDST) which would have a mirror up to 12 meters across. That’s 5 times the width of the 2.4-metre Hubble, which revolutionized astronomy with its sharp views of the cosmos, and nearly twice as wide as the James Webb Space Telescope (JWST), which is being readied for its 2018 launch.

An HDST would need to be at least 10 metres across to be able to spy on the atmospheres of dozens of exoplanets — the number needed to establish decent statistics on whether life is common in the Universe, Postman says. The telescope’s upper size limit of 12 metres is dictated by how much weight a feasible rocket system could launch into space.

Overall the HDST would be “”100 to 1,000 times as powerful as Hubble.”” That number comes from combining multiple factors of HDST as they compare with Hubble, including “”25 to 35 times the collecting area,”” or surface area of the telescope (the aperture squared), and four times the area of coverage. AURA’s plan for the HDST would place it in a region known as the second Lagrangian point (L2), about 932,000 miles (1.5 million kilometers) from Earth, which would give it a clearer and darker sky than the Earth-orbiting Hubble, reducing background noise from image

It would cost US$10 billion or more. However, it would allow imaging like we are getting from a closeup of Pluto on regular basis for years all around the solar system and beyond to other stars and exoplanets.

Read next: Boeing’s fusion-fission hybrid propulsion patent is weak compared to the detailed NASA NIAC Pulsed Fission-Fusion design »
« Now we know Pluto has a diameter of 2370 kilometers and images comparing Pluto and moons to Earth