By modifying rice to enrich its nutritional value for people growing it in developing countries, a University of Melbourne researcher is helping prevent iron-deficiency anaemia and maternal mortality

Being able to prevent anemia and micronutrient deficiency in nearly two billion poor people will save over a million lives each year, prevent stunting which reduces IQ and boost productivity and GDP by over 20%. Success in this public health area would be one of the biggest things in reducing world poverty and improving public health in those countries. 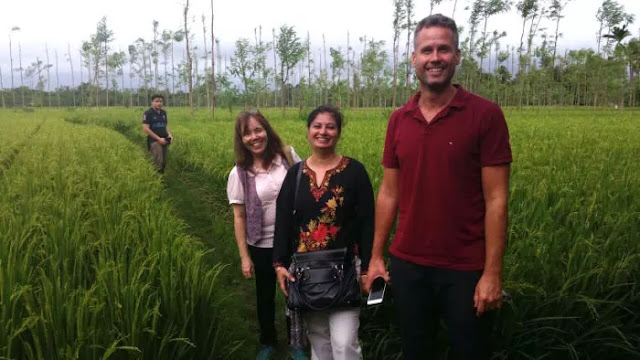 Iron and zinc deficiencies are widespread in the developing world and cause serious human disorders, such as child stunting, increased maternal mortality and iron-deficiency anaemia. In some communities, up to 80 percent of the diet comes from rice, which is a poor source of these vital nutrients.

Zinc deficiency is a major cause of stunting among children. About 165 million children with stunted growth run a risk of compromised cognitive development and physical capability. The IQ scores of the severely stunted children at eight years of age were 11 points lower than those of the children who were not stunted. When the children in the study were tested again at age 11, those who had been most severely stunted at age 2 still scored lower on the intelligence test than children who had not been stunted, although the gap was narrower at about 5 IQ points.

The World Health Organisation estimates two billion people, or 30 per cent of the world’s population, are anaemic, in many cases due to iron deficiency. This condition leaves people weak and lethargic and poses a significant and even fatal health risk to pregnant women and their children. Equal numbers are at risk of zinc deficiency with severe health consequences including stunted growth and impaired immune function.

Micronutrient deficiencies can lower IQ, cause stunting and blindness in children, lower resistance to disease in both children and adults, and increase risks for both mothers and infants during childbirth.

Researchers are now on the cusp of making a real difference. University of Melbourne plant geneticist Dr Alex Johnson and colleagues have created a genetically modified (GM) rice that produces grain with significantly more iron and zinc through a process called biofortification. And field trials have now shown that the biofortified rice is just as high yielding as conventionally bred rices.

Zinc is involved in more body functions than any other mineral. Zinc’s role includes acting as a necessary component of more than 200 enzyme systems, normal growth and development, the maintenance of body tissues, sexual function, vision, and the immune system. Zinc is essential for survival, and zinc deficiency has serious consequences for health, particularly during childhood when zinc requirements are increased. In addition, zinc deficiency also causes stunting. Randomized controlled trials showed that zinc supplementation can reduce the severity of morbidity from a number of common childhood infections, including diarrhea, pneumonia, and possibly malaria, by one-third.

In 2011, his team identified a specific rice gene that when “switched on” increases the amount of iron taken up from the soil and transported to the grain. Usually this gene is only activated when the rice plant itself is short on iron, but by modifying what drives the gene they were able to keep the gene switched on all the time. “We have basically tricked the plant into thinking it is continuously short of iron.”

They also found that it increased the uptake of zinc. “It was a dream result,” says Dr Alex Johnson.

Dr Johnson and his colleagues are now aiming to introduce the iron and zinc biofortified rice into Bangladesh where almost 80 per cent of cultivated land is dedicated to rice, but where more than half of all children and 70% of women are iron deficient.

They have had successful field trials in Colombia and the Philippines, the team is planning for large-scale deployment of this rice in Bangladesh and other rice consuming countries. The aim is to help as many people as possible and, with the financial and practical support of international NGOs, the enriched rice will be distributed to farmers in developing countries at no additional cost to traditional rice varieties.

Dr Johnson identified genes that are largely responsible for iron and zinc uptake in rice. By replacing the ‘on-off’ switches for these genes with ‘always on’ versions, Dr Johnson was able to greatly increase the activity of these genes. The rice strain his team developed has approximately four-fold more iron and two-fold more zinc in grain tissues compared to traditional rice.

The iron- and zinc-enriched rice varieties were originally developed by Dr Alex Johnson through research activities at the University of Melbourne and the Australian Centre for Plant Functional Genomics.

Field trials of the rice varieties are currently being conducted with HarvestPlus partners at the International Centre for Tropical Agriculture (CIAT) in Colombia and the International Rice Research Institute (IRRI) in the Philippines. World Vision Australia recognises the strong humanitarian need for iron- and zinc-enriched rice and is working with the team to identify and develop markets in developing countries.

Golden Rice and vitamin A

Golden rice [different from the Melbourne rice] is a variety of rice (Oryza sativa) produced through genetic engineering to biosynthesize beta-carotene, a precursor of vitamin A, in the edible parts of rice. It is intended to produce a fortified food to be grown and consumed in areas with a shortage of dietary vitamin A, a deficiency which is estimated to kill 670,000 children under the age of 5 each year.

In 2005, Golden Rice 2 was announced, which produces up to 23 times more beta-carotene than the original golden rice. To receive the USDA’s Recommended Dietary Allowance (RDA), it is estimated that 144 g of the high-yielding strain would have to be eaten. Bioavailability of the carotene from golden rice has been confirmed and found to be an effective source of vitamin A for humans

Golden rice has met significant opposition from environmental and anti-globalization activists that claim that there are sustainable, long-lasting and more efficient ways to solve vitamin A deficiency that do not compromise food, nutrition and financial security. A study in the Philippines is aimed to evaluate the performance of golden rice, if it can be planted, grown and harvested like other rice varieties, and whether golden rice poses risk to human health. Data has not been released yet.

Golden Rice was one of seven winners of the 2015 Patents for Humanity Awards by the United States Patent and Trademark Office.

The Bill and Melinda Gates Foundation supports the use of genetically modified organisms in agricultural development. Specifically, the foundation is supporting the International Rice Research Institute in developing Golden Rice, a genetically modified rice variant used to combat Vitamin A deficiency.

In June 2016, 107 Nobel laureates signed a letter urging Greenpeace and its supporters to abandon their campaign against GMOs, and against Golden Rice in particular