There is a 17 page paper that details the technical details and performance of the Google Tensor chips.

The TPU die leverages its advantage in MACs and on-chip memory to run short programs written using the domain-specific TensorFlow framework 15 times as fast as the K80 GPU die, resulting in a performance/Watt advantage of 29 times, which is correlated with performance/total cost of ownership. Compared to the Haswell CPU die, the corresponding ratios are 29 and 83. While future CPUs and GPUs will surely run inference faster, a redesigned TPU using circa 2015 GPU memory would go two to three times as fast and boost the performance/Watt advantage of nearly 70 over the K80 and 200 over Haswell.

In summary, the TPU succeeded because of the large—but not too large—matrix multipy unit; the substantial software-controlled on-chip memory; the ability to run whole inference models to reduce dependence on host CPU; a single-threaded, deterministic execution model that proved to be a good match to 99th-percentile response time limits; enough flexibility to match the NNs of 2017 as well as of 2013; the omission of general-purpose features that enabled a small and low power die despite the larger datapath and memory; the use of 8-bit integers by the quantized applications; and that applications were written using TensorFlow, which made it easy to port them to the TPU at high-performance rather than them having to be rewritten to run well on the very different TPU hardware.

Order-of-magnitude differences between commercial products are rare in computer architecture, which may lead to the TPU becoming an archetype for domain-specific architectures. We expect that many will build successors that will raise the bar even higher.

The TPU leverages the order-of-magnitude reduction in energy and area of 8-bit integer systolic matrix multipliers over 32-bit floating-point datapaths of a K80 GPU to pack 25 times as many MACs (65,536 8-bit vs. 2,496 32-bit) and 3.5 times the on-chip memory (28 MiB vs. 8 MiB) while using less than half the power of the K80 in a relatively small die. This larger memory helps increase the operational intensity of applications to let them utilize the abundant MACs even more fully.

Despite living on an I/O bus and having relatively little memory bandwidth that limits utilization of the TPU—four of the six NN (neural net) applications are memory-bound—a small fraction of a big number can nonetheless be relatively large, as the Roofline performance model demonstrates. This result suggests a “Cornucopia Corollary” to Amdahl’s Law: low utilization of a huge, cheap resource can still deliver high, cost-ef ective performance. 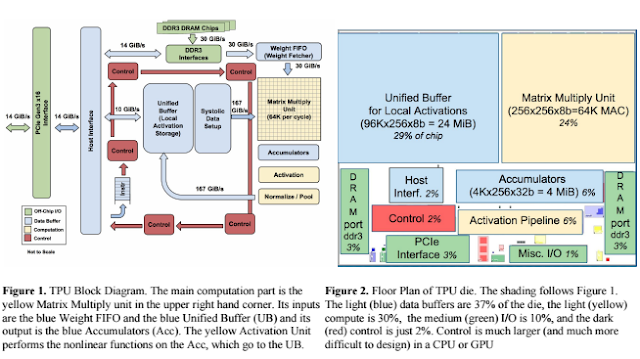