One of the common arguments that some in the environmental movement have against nuclear power is “we cannot make enough reactors” and if we do then the price will go up. I will show that historically the world build at a reasonable fast rate (28/year). Currently there are more and more nuclear reactors on order and are being completed at about 8 per year. The material used is a fraction of what is available and will not be a major impact on material prices. The alternatives of coal, wind and hydro also are highly intensive in steel and concrete. The main thing that impacts a nuclear reactors construction cost is length of time to build and interest rates. People do not understand how much steel and concrete is made each year in the world and how many buildings and things are built.

Building 1,000 one gigwatt nuclear plants per year would use less than 10% of the worlds annual concrete and steel. Modern nuclear reactors need less than 40 metric tons of steel and 190 cubic meters of concrete per megawatt of average capacity. 1,000 one gigawatt nuclear plants per year would need 40 million metric tons of steel and 190 million cubic meters of concrete. World supplies in 2006 are 1.24-billion tons of steel per year & 2.283 billion tons of coal per year.

The historical record of plant construction shows that the United States by itself built:

May, 2007 global reactor projections are an increase from february, 2007 of 3 being built, 12 planned and 52 proposed. A 21% increase from February. 286 reactors versus 219 reactors are now in the development pipeline.

Schedule about 6-8 completions per year worldwide for next few years.

Why would building more nuclear reactors each year increase costs ? What is the global limiting factors? We can make 100+ coal plants each year. Those as noted are about the same size and use twice as much steel and concrete.

Below are images of coal power plants and nuclear reactors. Notice that they are comparable in size. Coal power plants take 3-4 years to build and are being completed at about 2 per week.

This is a simplified coal plant An actual 1.58GW coal plant near Laughlin, Nevada. Note: each coal plant in the united states kills about 30-300 people from the resulting air pollution. Some plants are more polluting than others. The Laughlin coal plant produces 9 million tons of CO2 each year.

A 500 MW coal plant each year puts out (triple these numbers for the Laughlin plant):
– 10,000 tons of sulfur dioxide. Sulfur dioxide (SOx) is the main cause of acid rain, which damages forests, lakes and buildings.

– 10,200 tons of nitrogen oxide. Nitrogen oxide (NOx) is a major cause of smog, and also a cause of acid rain.

– 500 tons of small particles which are a health hazard, causing lung damage.

– 225 pounds of arsenic, 114 pounds of lead, 4 pounds of cadmium, and many other toxic heavy metal

– 2 tons of Uranium and 6 tons of Thorium

The large Tricastin enrichment plant in France (beyond cooling towers)
The four nuclear reactors in the foreground provide over 3000 MWe power for it. 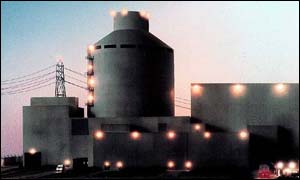 5 megawatt offshore wind turbine, need 600 of these to equal a single 1 gigawatt nuclear reactor (wind has less operating load factor 30% versus 90%. The wind is not always blowing, but nuclear reactions are always happening) During the 70’s and 80’s there were years with 28 nuclear reactors built (1984) worldwide. The cost factors are primarily financing costs. High interests rates in the 1970s and 1980s were not good. Also, delays because of construction skrews ups. But large construction like high rise buildings and ocean liners and freighters are able to go on around the world at a far higher rate than most people understand.

Wind and solar are not being built fast enough.
Wind which has been scaling up had a recent report in the Wall Street Journal that they are facing new build constraints. Supply problems. They cannot build as fast as they would like which is still less than the level needed to displace the new coal additions.

Coal is the main power source that will be added in China and the United States over the next few years.
In the USA (the official stats show that http://www.eia.doe.gov/) most of the 30 GW added each year has been natural gas power, but that from 2009 onwards it is shifting to coal power. That coal power will not be built with sequestering. It will mostly be the most polluting version which is pulverized coal.

Modern larger 1.5 GW to 2 GW nuclear reactors can be built. Build them at the old peak rate of 10 to 12 per year and the new coal that would have been added could be displaced.

The construction capacity would be a fraction of the overall building capacity of the US and the world.

World production and consumption of cement totaled 2.283 billion tons in 2005, an increase of about 5.75%, or 124 million tons, over the previous year. (All tonnage figures in this article are metric.) This continues the annual increases we have seen in almost every year since the 1970s.

From Per F. Peterson, Department of Nuclear Engineering. The Future of Nuclear Energy Policy: A California Perspective 2005:

Nuclear power plants built in the 1970’s used
40 metric tons of steel, and 190 cubic meters of concrete,
for each megawatt of average capacity.

This is due to the massive size of coal plant boilers and pollution control equipment.

Conversely, natural gas combined cycle plants take
3.3 metric tons of steel and 27 cubic meters of concrete—
explaining why natural gas is such an attractive fuel, if it is cheap.
We are running out of natural gas.

The nuclear power plants that we built in the 1970’s were very efficient in their use of steel and concrete. In response to the Three Mile Island accident, however, “bloat” occurred in the designs of new, evolutionary reactors, with steel and concrete inputs increasing by 25 to 50 percent. This is the case for the ABWR, first built in Japan in the 1990’s, and for the EPR, the new European plant design which be built in Finland.

But a major change has occurred with the new nuclear plant designs that will be
built in the United States. These new designs—the ESBWR and the AP-1000—use
passive safety systems, that replace the external cooling supplies, large pumps, and diesel generators used for emergency cooling in the old plant designs with simple, gravity driven heat exchangers. These changes result in large reductions in steel and concrete inputs for these new passive plant designs—actually below the values of our 1970’s plants. Thus we can expect, if they are built in the time periods demonstrated in Japan, that these new nuclear plants can have the lowest construction costs of any reactors every built.

FURTHER READING:
There are high burn reactors which can use up 100% of the fuel instead of 0.7 to 2%.

I have looked at the costs of all energy sources

Money “spent” on nuclear energy was an investment that provided energy for consumers and profit for the companies.

Investment in energy provides energy at a price per kilowatt hour, which is how energy should be compared.

Oil and coal kill 3 million people each year because of air pollution. Oil is about 50% of that. Plus little wars over oil. Japan started WW2 with the USA over lack of access to oil. The Iraq wars.

I have written a lot about coal

Look at my past articles on nuclear power

Getting the scope of the energy problem right

Nuclear proliferation has killed no one

Uranium is in coal waste

There are large uranium supplies

Booz Allen Hamilton has an estimate of $41 trillion from 2005-2030 for urban cities worldwide on infrastructure. World spending is about $300 billion per year on power infrastructure. (2007)

Read next: Accelerating Future on the Singularity and Transhumanist Technology »
« Breakthrough in understanding how embryonic stem cells function