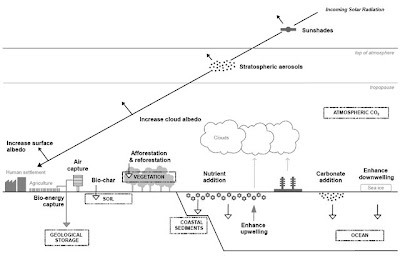 Researchers at the University of East Anglia (UEA) have carried out the first comprehensive assessment of the relative merits of different geoengineering schemes in terms of the climate cooling potential. Their paper appears in the journal Atmospheric Chemistry and Physics Discussions. [H/T Greencar congress Using a mix of these geoengineering techniques and mitigating production of CO2 (by changing energy production away from coal and oil to nuclear and renewables) are both required. Some have noted that the different geoengineering techniques should be analyzed and compared on how well they help avoid disasterous changes in the chemistry of the ocean. Biochar sequestering would be such an ocean chemistry friendly method.

Climate geoengineering proposals seek to combat the effects of climate change—in particular to counteract the effects of increased CO2 in the atmosphere. There are two basic approaches proposed: reducing the atmospheric absorption of incoming solar (shortwave) radiation, or removing CO2 from the atmosphere and transferring it to long-lived reservoirs, thereby increasing outgoing longwave radiation.

A number of schemes have been suggested including nutrient fertilization of the oceans, cloud seeding, sunshades in space, stratospheric aerosol injections, and ocean pipes.

The critical metric for a geoengineering scheme is its effectiveness in cooling the climate; Tim Lenton and Nem Vaughan at UEA quantified that effectiveness in terms of radiative forcing potential.

Enhancing carbon sinks could bring CO2 back to its pre-industrial level, but not before 2100—and only when combined with strong mitigation of CO2 emissions. Carbon cycle geoengineering carries less risk associated with failure.

Stratospheric aerosol injections and sunshades in space have by far the greatest potential to cool the climate back to pre-industrial temperatures by 2050. However, they also carry the most risk because they would have to be continually replenished and if deployment was suddenly stopped, extremely rapid warming could ensue.

Existing activities that add phosphorous to the ocean may have greater long-term carbon sequestration potential than deliberately adding iron or nitrogen.

On land, sequestering carbon in new forests and as bio-char (charcoal added back to the soil) have greater short-term cooling potential than ocean fertilization as well as benefits for soil fertility.

Increasing the reflectivity of urban areas could reduce urban heat islands but will have minimal global effect.

The beneficial effects of some geo-engineering schemes have been exaggerated in the past and significant errors made in previous calculations.

Climate geoengineering is best considered as a potential complement to the mitigation of CO2 emissions, rather than as an alternative to it. Strong mitigation could achieve the equivalent of up to -4W m-2 radiative forcing on the century timescale, relative to a worst case scenario for rising CO2. However, to tackle the remaining 3W m-2, which are likely even in a best case scenario of strongly mitigated
CO2, a number of geoengineering options show promise.

FURTHER READING
Jamais Cascio looks at the study as well and provides this analysis.

* Shortwave options that either increase the reflectivity (or albedo) of the Earth or block some percentage of incoming sunlight. These include megascale projects like orbiting mirrors and stratospheric sulphate, as well as more localized and prosaic methods like white rooftops and planting brighter (=more reflective) plants.
* Longwave options are those that attempt to pull CO2 out of the atmosphere in order to slow warming. These include massive reforestation projects, “bio-char” production and storage, various air capture and filtering plans, and ocean biosphere manipulation with iron fertilization or phosphorus.

Most effective (again, strictly in terms of radiative impact) over this century would be either space shields, stratospheric injection, or increasing cloud levels with seawater. Any of these, alone, could actually be enough to counteract global warming along with aggressive carbon emission reductions.

Next would be increasing desert albedo (essentially putting massive reflective sheets across the deserts of the world) or direct carbon capture and storage (ideally captured from burning biofuels). These would slow global warming disaster, but wouldn’t necessarily be enough to stop it. Biochar, reforestation, and increasing cropland & grassland albedo come in third, half again as effective as the previous proposals; the remaining methods would be even less-effective.

The “bathtub model” by Andy Revkin, New York Times, for too much CO2 and geoengineering.

Imagine the climate as a bathtub with both a running faucet and an open drain. As long as the amount of water coming from the faucet matches (on average) the capacity of the drain, the water level in the tub (that is, the carbon level in the atmosphere) remains stable. Over the course of the last couple of centuries, however, we’ve been turning up the water flow — increasing atmospheric carbon concentrations — first slowly, then more rapidly. At the same time, one consequence of our actions is that the drain itself is starting to get clogged — that is, the various environmental carbon sinks and natural carbon cycle mechanisms are starting to fail. With more water coming into the tub, and a clogging drain, the inevitable result will be water spilling over the sides of the bathtub, a simple analogy for an environmental tipping point catastrophe.

With this model, we can see that simply slowing emissions to where they were (say) a couple of decades ago won’t necessarily be enough to stop spillover, if the carbon input is still faster than the carbon sinks can handle.

That said, our efforts at stopping this catastrophe have — rightly — focused on reducing the water flowing from the faucet (cutting carbon emissions) as much as possible. But the flow of the water is still filling the tub faster than we can turn the faucet knob (we’re far from getting carbon emissions to below carbon sink capacity). Without something big happening, we’re still going to see a disaster.

The shortwave geoengineering proposals, by blocking some of the incoming heat from the Sun, are the equivalent here to building up the sides of the tub with plastic sheets. The tub will be able to hold more water, although if the sheeting fails, the resulting spillover will be even worse than what would have happened absent geoengineering.

The longwave geoengineering proposals, by increasing carbon capture, are the equivalent here to clearing out the drain, or even drilling a few holes in the bottom of the tub (let’s assume that just goes to the drain, too). The water will leave the tub faster, but you may have to drill a lot of holes to have the impact you need — and drilling too many holes could itself be ruinous.

Read next: How Long Until There is a Capable Fusion Neutron Source for Transmuting Uranium »
« Polymer Implant Trains Your Cells to Kill Cancer