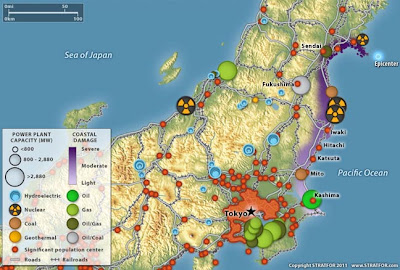 The Oildrum has covered the situation at the japanese oil refineries and the shortage of oil in Japan.

Nine of the Japanese refineries were damaged and put out of action, and this dropped the amount of fuel being refined from 4,500,000 bd down to 3,100,000 bd

There are several different aspects to the problem; first the oil has to come ashore. With ports closed and unable to re-open for possibly months, shipments from the Middle East, which supplies 80% of Japan’s need, have now been curtailed until the situation becomes clearer. Within the country, the Japanese Government has released around 8 million barrels of oil from their strategic reserve. It is also shipping 250,000 barrels of refined product to the area affected by sea (though this runs into the issue of how to get into the ports and distribution network). At Chiba some of the port has been able to re-open but not the terminal that fed to the Cosmo refinery (since that had burned).

There is a claim in the comments that
A lot of people, especially elders, died because of lack of medicine in the aftermath because there was not sufficient oil to use in order to ship the supplies(food, water, medicine) people needed.

There is also claims that the evacuation from fear of radiation resulted in the death of 14 elderly people. This is certainly possible as there are many elderly in a fragile state, so the larger than what turned out to be necessary (in hind sight) evacuation certainly did not help. It would have been better if Japan had been able to maintain better control and avoided any evacuation. There was the need for evacuation from the coast because of further tsunami risks and from earthquake areas from the many aftershocks that followed.

An estimated 452,000 people are living in evacuation facilities, while the death toll has surpassed 7,000 (latest estimates are that the death toll will go over 18000).

There is a list with a status list of nuclear plants, thermal power stations, oil refineries, ports and metal-related industries shut in Japan following the earthquake and tsunami.

The green box with a four in it is Fukushima Daiichi.

Conveyor belts at Tohoku’s coal-fired Haramachi plant I and II have also been damaged by the quake, said a trader who has seen photographs of the damage, but he said it was not clear if the plants’ turbines and the cooling walls were also affected.

A 7.3-metre tsunami wave rammed into Soma port on Friday, causing extensive damage. Other ports that have been hit include Hachinohe, Sendai, Onahama and Ishinomaki.

Other trade sources said coal stockpiles held by Tohoku and Japan’s Joint Power Co (JOBAN) at the coast were likely to have been washed away or contaminated by seawater.

Three coal carriers, the Shiamizu, Shirouma and Coral Ring, had ran aground while discharging or preparing to unload cargoes because of the earthquake and ensuing tsunami.

Read next: Occupational fatality statistics from 1992-2009 in the USA »
« New peanut allergy treatment works and increases peanut tolerance by 1000 times