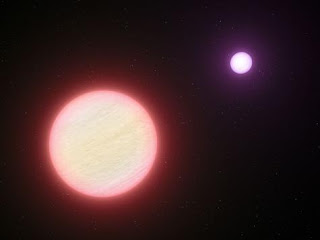 1. A pair of brown dwarfs named CFBDSIR 1458+10. Observations with ESO’s Very Large Telescope and two other telescopes have shown that this pair is the coolest pair of brown dwarfs found so far. The colder of the two components (shown in the background) is a candidate for the brown dwarf with the lowest temperature ever found — the surface temperature is similar to that of a cup of freshly made tea.

This research was presented in a paper, “CFBDSIR J1458+1013B: A Very Cold (greater than T10) Brown Dwarf in a Binary System”, (link to Arxiv version) Liu et al. to appear in the Astrophysical Journal.

3. Astrophysical Journal Letters – Discovery of a candidate for the coolest known brown dwarf

WD 0806-661B is a possible brown dwarf was detected 63 light-years from Earth and has an approximate mass seven times that of Jupiter. It has, instead, the potential of actually being a planet, as it is in orbit of a white dwarf, known as WD 0806-661. However, WD 0806-661B has an orbital distance of 2,500 AU. If it is a brown dwarf, then it would be a candidate for a class of brown dwarfs that have only been theorized. Known as the “Y”-class family, this class would include brown dwarfs that are cool enough to have water vapor in their atmosphere capable of condensing to form clouds and water.

We have used multi-epoch images from the Infrared Array Camera on board the Spitzer Space Telescope to search for substellar companions to stars in the solar neighborhood based on common proper motions. Through this work, we have discovered a faint companion to the white dwarf WD 0806-661. The comoving source has a projected separation of 130”, corresponding to 2500 AU at the distance of the primary (19.2 pc). If it is physically associated, then its absolute magnitude at 4.5 μm is ~1 mag fainter than the faintest known T dwarfs, making it a strong candidate for the coolest known brown dwarf. The combination of M 4.5 and the age of the primary (1.5 Gyr) implies an effective temperature of ~300 K and a mass of ~7 M