IBM formally unveiled the sixth annual “IBM 5 in 5″ (#ibm5in5) – a list of innovations that have the potential to change the way people work, live and interact during the next five years:

1. People power will come to life

Advances in renewable energy technology will allow individuals to collect this kinetic energy, which now goes to waste, and use it to help power our homes, offices and cities.

Imagine attaching small devices to the spokes on your bicycle wheels that recharge batteries as you pedal along. You will have the satisfaction of not only getting to where you want to go, but at the same time powering some of the lights in your home.

2. Biometric sensors will be used instead of passwords

Scientists in the field of bioinformatics have designed headsets with advanced sensors to read electrical brain activity that can recognize facial expressions, excitement and concentration levels, and thoughts of a person without them physically taking any actions.

Within 5 years, we will begin to see early applications of this technology in the gaming and entertainment industry. Furthermore, doctors could use the technology to test brain patterns, possibly even assist in rehabilitation from strokes and to help in understanding brain disorders, such as autism.

4. The Digital divide will cease to exist

There are 7 billion people inhabiting the world today. In five years there will be 5.6 billion mobile devices sold – which means 80% of the current global population would each have a mobile device.

As it becomes cheaper to own a mobile phone, people without a lot of spending power will be able to do much more than they can today.

NBF – This is a powerful trend that is already well underway. It is a pretty slam dunk and safe prediction. However, another trend that is well underway is the emergence of the global middle class. This is where China, India, South East asia, South America and parts of Africa are getting wealthier.

In 2010, 1.8 billion people in the world are middle class, or 28 percent of the global population. About half of these people live in developed economies, with another fifth found in Brazil, Russia, India, and China – the so-called emerging BRIC economies. Less than 2 percent of the world’s population is rich by our definition; a significant majority, 70 percent, is poor. 2022 marks the first year more people in the world are middle class than poor.

In five years, unsolicited advertisements may feel so personalized and relevant it may seem spam is dead. At the same time, spam filters will be so precise you’ll never be bothered by unwanted sales pitches again. 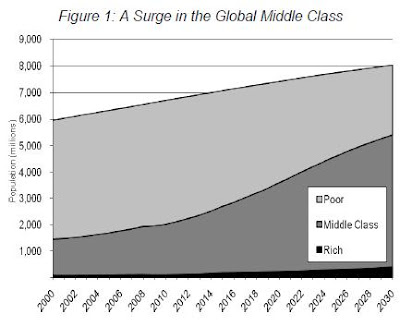 iRobot (maker of the Roomba) has a new robot, called Ava. iRobot made it compatible with applications written for Apple’s iOS operating system and Google’s Android platform. “To truly accelerate the robot industry, we need more people developing for it,” said iRobot Chief Executive Colin Angle in an interview. “Now, if you can develop for Android or iOS, you’re a roboticist.”

It uses a smartphone or a tablet as its head. Amazon’s Kindle Fire is $199. There is an Indian tablet for $35.

Low cost by very powerful tablets and robots and a lot of useful apps looks like a winning combination. I have predicted that it could come together with one billion robots by 2020. By Dec, 2016 I will say that there will be 50 million robots.

Heartland robotics is targeting a $5000 robot with a robotic arm which will be used to revolutionize low cost manufacturing.

Information and Communications Technology (ICT) and broadband can have a direct and measurable impact on GDP and that a number of studies have indicated that ‘true’ broadband (that is, symmetrical bandwidth in excess of 100 Mb/s) can increase GDP by up to 5%. Other studies indicate a return ten times greater than the investment in broadband.

By Dec, 2016 there will be a lot of LTE rollout and more fiber to the home rollout.

Smartphones should have 100 times the processing by 2015. (Nvidia roadmap)
In the 2020s, we should have petaflop mobile systems.

Spacex will be greatly reducing costs.
Falcon Heavy’s should be flying regularly by Dec, 2016.
The reusable rocket work may have gotten to flying back a first stage by Dec, 2016.

China is well underway with their first pebble bed reactors. The first one will be done by about 2015.

There is the highly controversial possibility of Rossi-Focardi Energy catalyzer.

There are other possible cold fusion contenders who have a chance of succeeding by Dec 2016.

China could have a prototype molten salt thorium reactor by Dec, 2016.

Universal vaccinations will have advanced and greatly reduced deaths in developing countries.

Economic progress in India and parts of Africa will have reduced the number of sooty cookers which will reduce deaths and health problems from indoor air pollution.

There will be advances towards more clean water availability.

Read next: KIT Researchers Transfer the Concept of an Optical Invisibility Cloak to Sound Waves »
« Solar Cell with external quantum efficiency of 114 percent