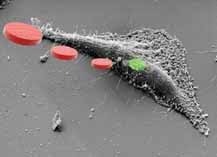 Silicon-based chips offer high flexibility and versatility as they are based on semiconductor and MEMS technology. They can be top-down fabricated with well-controlled shape and size. Silicon microchips can be internalized into eukaryotic cells (see image) without interfering with cell viability. Engineered intracellular chips with different biomolecules attached to the surface can be used as intracellular sensors.

3 micron X 3 micron by 0.5 micron chips were placed into cells.

Researchers at Rice University and the MD Anderson Cancer Center in Houston have developed a simple way to make cells form 3-D structures. They developed a gel made up of a polymer, iron oxide nanoparticles, and engineered viruses called phage. When cells are added to this mixture, the phage cause them to absorb the magnetic particles. The Houston group showed that they could use a weak magnet to hold magnetized brain cancer cells in a 3-D suspension. Gene-expression studies showed that these suspended cells behave more naturally than a control group grown on a conventional flat surface: the cancer cells were producing a mix of proteins very similar to what they produce in the body

Cell culture is an essential tool in drug discovery, tissue engineering and stem cell research. Conventional tissue culture produces two-dimensional cell growth with gene expression, signalling and morphology that can be different from those found in vivo, and this compromises its clinical relevance. Here, we report a three-dimensional tissue culture based on magnetic levitation of cells in the presence of a hydrogel consisting of gold, magnetic iron oxide nanoparticles and filamentous bacteriophage. By spatially controlling the magnetic field, the geometry of the cell mass can be manipulated, and multicellular clustering of different cell types in co-culture can be achieved. Magnetically levitated human glioblastoma cells showed similar protein expression profiles to those observed in human tumour xenografts. Taken together, these results indicate that levitated three-dimensional culture with magnetized phage-based hydrogels more closely recapitulates in vivo protein expression and may be more feasible for long-term multicellular studies.